“As far as life on the planet is concerned, together with extinction, the emergence and spread of infectious diseases may be said to be one of modernization’s major and long-lasting products,” says Christos Lynteris, Senior Lecturer in Social Anthropology at the University of St Andrews in this interview with GRIP for the series “Inequality in the (Post-) Pandemic City”. 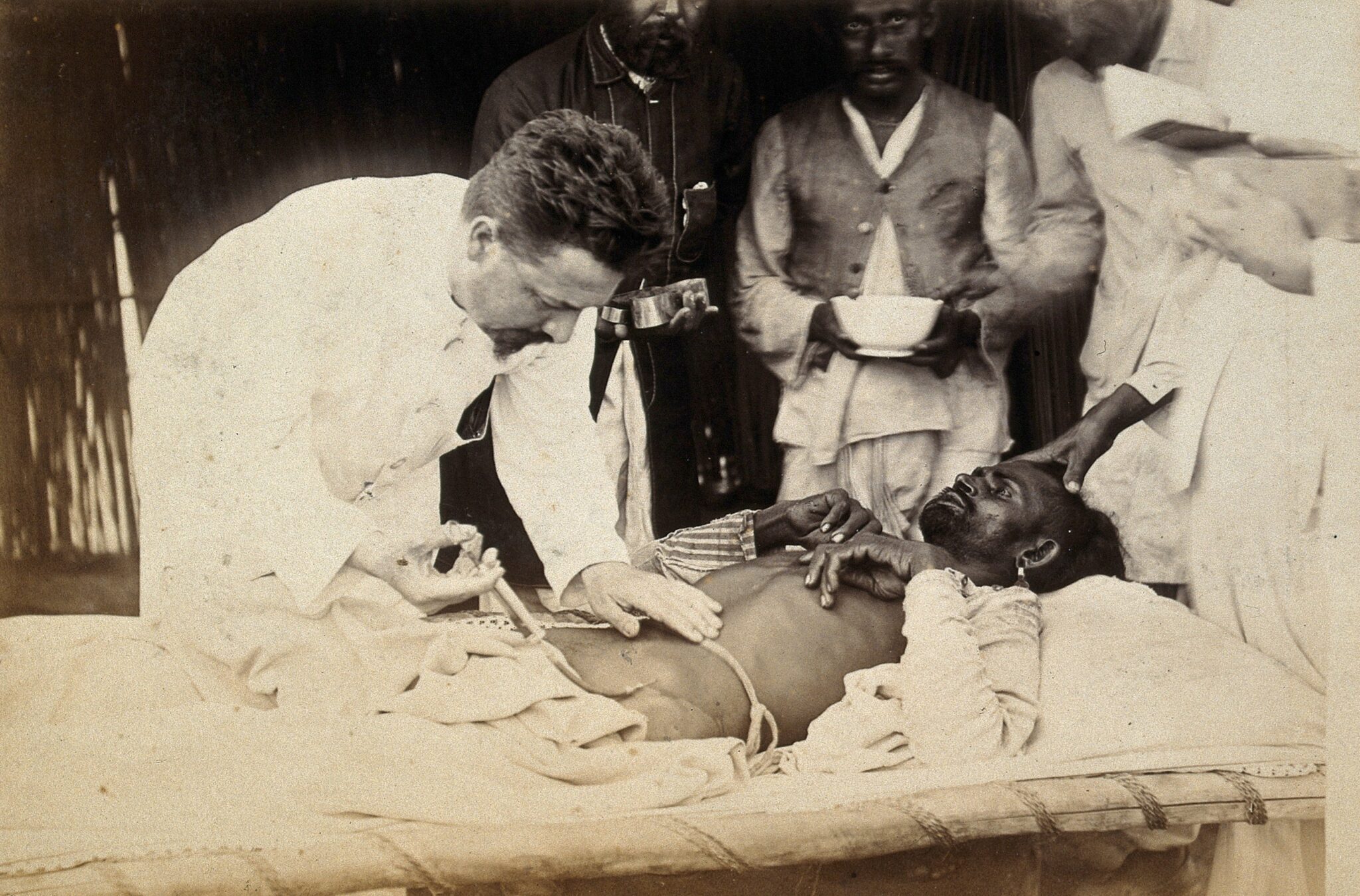 The miniseries “Inequality in the (Post-) Pandemic City” probes how different dimensions of inequality are shaped, exacerbated, materialized, or co-exist in globally diverse urban contexts. In this series, we provide insights from researchers, scholars and specialists and ask how the effects of the pandemic, including the virus itself or the intervention measures associated with it, are impacting people and communities, particularly in relation to economic, political, social, cultural, environmental and knowledge-based inequalities.

Next up in the series is an interview with Christos Lynteris, Senior Lecturer in Social Anthropology at the University of St Andrews, UK. Christos is a medical anthropologist who has been investigating epistemological, biopolitical and aesthetic aspects of infectious disease epidemics. He has authored and edited multiple books on relating topics – Ethnographic Plague, Human Extinction and the Pandemic Imaginary, Sulphuric Utopias: The History of Maritime Sanitation, Histories of Post-Mortem Contagion, Plague and the City, The Anthropology of Epidemics, and Framing Animals as Epidemic Villains. He was the Principal Investigator or the European Research Council funded project Visual Representations of the Third Plague Pandemic and is currently the Principal Investigator of the Wellcome Investigator Award funded project The Global War Against the Rat and the Epistemic Emergence of Zoonosis.

In the edited volume “The Anthropology of Epidemics”, you along with the other editors write that “epidemics are the dark side of modernisation, medical and political progress”. Could you please elaborate on that and comment on how this description has played out with the COVID-19 pandemic?

Whig histories of infectious diseases and epidemics portray human history as a progressive course where humanity gradually manages to master the challenges of infectious diseases. This historical narrative does not just reproduce a false notion of human history as inevitable progress, but also distracts our attention from the fact that economic and technological development has contributed the spread of pathogens. From the voluntary as well as involuntary spread of smallpox and other diseases to the Americas during their invasion and conquest by European empires, to the spread and establishment of plague as an endemic disease in wild rodent populations in parts of Africa and the Americas in the twentieth century, maritime movement and trade have been major factors in the global spread of pathogens. At the same time, the impact of industrialization, urbanization and colonization on public health has been well recorded by medical and environmental historians. Finally, as we note in the Introduction to the volume The Anthropology of Epidemics, in the contemporary world, epidemics “represent the impossibility of securing the body politic in an ever-more interconnected, technologically advanced and globalised world”.

This is not to say that science has not contributed to our understanding, treatment, containment and prevention of infection diseases. Since the dawn of bacteriology in the 1870s in particular there have been enormous advances in these fields, which have saved millions of lives. Yet an exclusive focus on these achievements risks creating the mistaken impression that diseases and epidemics in particular are simply a by-product of modernization, or worse a relic from the past. In reality, as far as life on the planet is concerned, together with extinction the emergence and spread of infectious diseases may be said to be one of modernization’s major and long-lasting products.

COVID-19 has followed this pattern with no major surprises: it has spread across the globe as the result not only of international transport, but also because of neoliberal economics which have led governments across the globe to act too slowly and too hesitantly so as to not harm the economy and at the same time to over-rely on new technologies (for test and tracing above all) with disastrous results, when traditional methods (of contact tracing for example) as well as novel ones developed in response to recent outbreaks (e.g. community led epidemic containment, as developed in the context of the Ebola epidemic in 2014-16) were perfectly fit for purpose but required a strengthening of the social state, bold investments in the public sector, and taking society seriously as a partner in epidemic control, something politically and ideologically abhorrent for these administrations. In the realm of public health, science is only as good as the governments implementing it, hence the preventable disaster in which we are going through today.

You have been working on the visual representations of diseases, specifically plague. What are the political aspects of visual presentations of epidemics, and how does this play into the various dimensions of inequalities?

The outbreaks composing the third plague pandemic (1894-1959) were the first to be captured by the photographic lens. The impact of this was immense at the time, as newspapers were also newly able to carry photographs on their pages. The result was a global circulation of photographs of interconnected outbreaks of the disease as these took place in some of the world’s most important cities: Hong Kong, Sydney, Cape Town, Glasgow, San Francisco, Buenos Aires, Alexandria, Rio de Janeiro, Los Angeles, Bombay, etc. Photographs of outbreaks kept making headlines for decades, establishing a visual language through which readers came to experience for the first time the “pandemic” as a biological and social phenomenon. This was the first time the term “pandemic” was used in the press, and photography played a key role in it becoming a staple of twenty-first century thinking and experience, which is still with us today.

These photographs were of course highly political. Whether involving the promotion of colonial representations and agendas in Asia and Africa, rival geopolitical interests between empires, as in Manchuria, or conflict between local and national authorities, as in San Francisco or Porto, epidemic photography came to foster and relay not simply medical but also political narratives and interests. Photography was used as proof not only of the involvement of this or that disease vector, or the importance of this or that transmission pathway, but also of the supposed necessity of segregation or civilizing impact of European colonialism. It was used to promote vaccination and fumigation, yes, but also to preach national, racial or class superiority and to legitimize the “sanitary” torching of native houses in the colonies or the destruction of Chinatowns in the USA. At the same time, epidemic photography carried with it more subtle political textures and possibilities. Images meant to glorify were sometimes used in satirical or even subversive ways. Meanings of epidemic images were constantly in flux, forming part of larger social debates and negotiations of the causes or meanings of particular outbreaks.

Both levels of epidemic photography’s political life, the one more vertical the other more horizontal, are also in place today in the COVID-19 pandemic. The state and corporate media have been saturated by repetitive images of labs, lockdowns, wet markets and hospitals, while in the social media we are able to discern a multitude of images of daily life under the pandemic that defy semantic or symbolic closure. The difference today is that by contrast to the third plague pandemic, new technologies have allowed almost everyone to take and circulate images of the COVID-19 pandemic online. This does not of course mean a dissolution of visual hierarchies in production or circulation has been achieved. Yet it allows, within the parameters of algorithms, which are themselves a heteronomous system of organization and valorization, some degree of possibility for non-official representations of the pandemic to contest official ones. Nonetheless, I must say that I have not seen anything really surprising yet emerge in the social media, as far as the visual representation of COVID-19 is concerned. Most grassroots-produced images, and of course all of the corporate or state ones, fall roughly within the visual language established during the third pandemic, though of course those taking these images are unaware of the fact. Plague photography, we could say, in a slight analytical misuse of Walter Benjamin, has become something of an “optical unconscious” for our societies. The real challenge would be to use our experience with COVID-19 to break with this essentially colonial visual tradition. But to do that we first need to challenge the meaning of the “pandemic” which has for too long been associated with what Faye Marie Getz has identified as the “gothic” image of a world-historical catastrophe.

The interrelation between epidemics and the urban environment, both as a built structure and as an actual ecology, has been a long-standing one. I will not comment here on how cities have contributed to the spread of diseases, as I am not a disease ecologist. What I can say as a medical anthropologist is that epidemics have consistently led to the medicalization of the urban environment and to public health interventions on it for centuries. From banning or relocating abattoirs or meat markets in English towns as a prophylactic against plague in the middle ages, to paving and widening the streets against cholera in Paris or razing working-class neighbourhoods to get rid of yellow fever in Rio de Janeiro in the nineteenth century, urban intervention has been a staple of approaches to epidemic control from both miasmatic, contagionist and later bacteriological perspectives. Historians have well noted that the actual emergence of bacteriology, revolutionary as it was in identifying pathogens, did very little to dislocate attention from urban space as the source of disease.

In many ways we still live in this age of bacteriological-sanitary synthesis, with a good dose of miasmatic thinking too. Whether COVID-19 will lead to the large-scale changes that the struggle against cholera, plague, yellow fever and malaria brought about in the nineteenth and twentieth centuries is doubtful. In general, big infrastructural changes have followed persistent epidemics rather than one-off outbreaks, even if these are of a global scale, like the flu pandemic of 1918-19. We also need to remember that these changes – the razing of entire neighbourhoods, the drying of swamps, the rat-proofing of entire cities, to give but few examples – all took place in a completely different social, political, and economic context. On the one hand these interventions were led by states invested on “big works” and long-term planning, things incompatible with neoliberal economics.

On the other hand, they usually required a high degree of authoritarianism, where any resistance was met with brutal force. It is hard to see how such large-scale interventions would be acceptable today even if states were willing to fund them. Where change may take place is in areas where the private sector may be involved, and where interventions may create their own cycles of investment and profit. But whether this actually happens really depends on social responses to the corporate management of the pandemic. Will people accept the exploitative conditions of working for home on long-term bases, without their employers subsidizing their utility bills or part of the rent even, or will employers, faced with a refusal of employees to work from home, have to adapt working spaces by investing in proper ventilation systems, individual offices, etc.? We always need to remember that, although they are constantly being left out of the frame in official narratives, it is neither states nor science, but always societies that resolve epidemics, or not as the case may be.