“Are we really in this together?” asks Ishan Anand and Anjana Thampi at Jindal Global Law School in this essay, arguing that the crisis which has followed the COVID-19 pandemic in India has exacerbated pre-existing inequalities, and disproportionately affected certain groups. 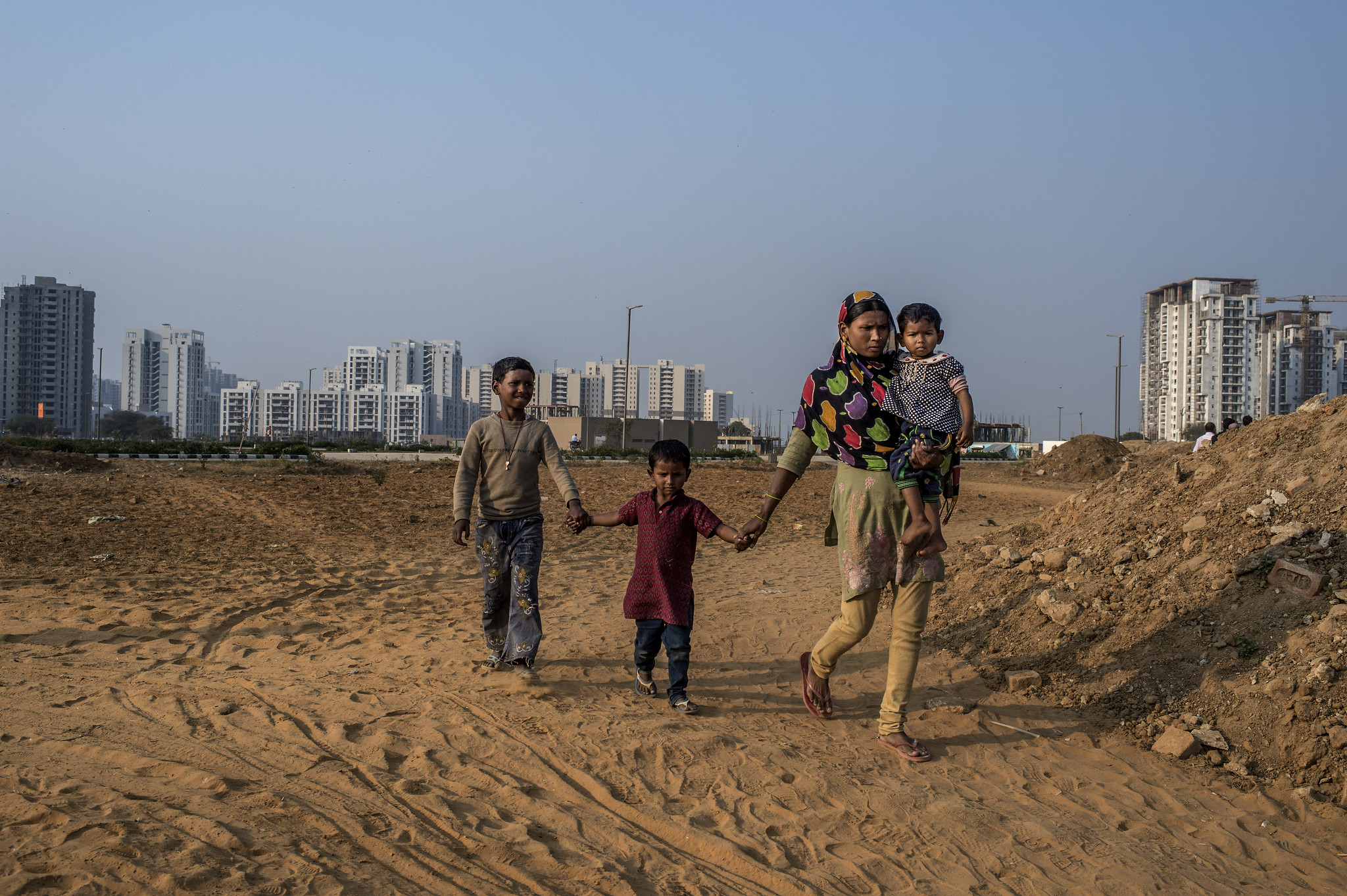 Rubina is a migrant from the Indian state of Bihar. Here she is taking her children to a mobile crèche in Delhi. Photo: Atul Loke ©ODI

The miniseries “Inequality in the (Post-) Pandemic City” probes how different dimensions of inequality are shaped, exacerbated, materialized, or co-exist in globally diverse urban contexts. In this series, we provide insights from researchers, scholars and specialists and ask how the effects of the pandemic, including the virus itself or the intervention measures associated with it, are impacting people and communities, particularly in relation to economic, political, social, cultural, environmental and knowledge-based inequalities.

Pandemic and the Crisis of Inequality in India

A common catchphrase during the pandemic was that “we are all in this together”. Are we really? In a recent working paper, we argue that the crisis following the pandemic in India aggravated and was in turn worsened by pre-existing inequalities and that informal workers and historically deprived social groups were disproportionately affected.

In March 2020, after about 500 COVID-19 cases had been reported, the Indian government announced a nationwide lockdown at a four-hour notice. India’s lockdown was among the most stringent in the world and continued until the end of May. The urgency of the lockdown was not matched by adequate allocation of relief funds, with India’s fiscal stimulus estimated to be less than 2 percent of the GDP. An unplanned lockdown, lacklustre implementation of relief and containment and inadequate funds worsened the economic and health crises. India currently ranks second in the list of countries with the highest reported cases of COVID-19 and third in the list of related deaths, apart from which the economy is undergoing a major contraction.

Around 90 percent of India’s 480 million strong workforce is informally employed. That is, they are largely outside the ambit of job security or income-related safety nets. During the lockdown, the unemployment rate rose to 24 percent and at least 21 million salaried workers lost their jobs. Millions of informal workers, daily-wagers, vendors and other self-employed persons who survived on low incomes even before the pandemic found themselves without work or pay during the lockdown. There was a sharp rise in distress and hunger across the country, and starvation deaths were reported from among vulnerable communities.

The lockdown was particularly harsh on migrant workers in cities, who had little money left to pay for rent, food and other essentials. Thousands were evicted across the country. Given the uncertainties around the pandemic and little by way of relief, thousands of migrant workers walked hundreds of kilometres to reach their homes. Several lost their lives on the way, succumbing to exhaustion, accidents and even police brutality.

The Indian labour market reflects deep social divisions. Female workers comprise a very low proportion of the workforce and earn only 63 percent of male workers on average. Workers of the historically disadvantaged scheduled castes earn only 55 percent of the relatively advantaged castes. Women and socially deprived groups faced disproportionate job loss during and after the lockdown. Even when employed, they continue to be engaged in activities that make them more susceptible to the virus or are stigmatising.

The effects of the pandemic were also harshly felt by those who live in congested housing spaces and rely on shared water and sanitation facilities. For one-fourth of the Indian population, physical distancing is a pipe dream as they stay in a one-room dwelling and with at least two other people in many cases. As per the latest data, around 67 percent of the population did not have access to piped drinking water and 21 percent did not have access to toilets in 2018. Around 31 million people reside in urban slums with extremely poor facilities. A sero-survey in the city of Mumbai revealed that 57 percent of the people tested in slums had been exposed to and developed antibodies against SARS-CoV-2, as compared to 16 percent of those tested in residential societies.

While the pandemic and the lockdown dealt a blow to a large majority of the population, 2020 was a good year for Indian billionaires who increased their combined net worth by 35 percent between April and July. The richest man in India reportedly increased his wealth by USD 12.3 million every hour since the lockdown in March.

The current crisis is a product of disparities in the labour market, lack of access to amenities and inadequate social security provisions. This cannot be seen as dissociated from the nature of economic reforms implemented in India since the late 1980s. India’s economic growth during the last two decades has been marred by rising inequality. The rural-urban gap has increased sharply, as has the gap between formal and informal workers. The growth story has also bypassed the agrarian sector, which has been in crisis for much of the post-liberalisation period but continues to employ roughly half of India’s workforce.

The failure of the growth regime to generate decent and well-paying jobs has been compounded by stagnant real wages in recent years. While worker productivity increased manifold in the organised manufacturing sector, the gains were absorbed entirely by the rising profit share. In a majority of India’s largest companies listed in the stock exchange, the top-paid executive earned more than 100 times the median salary of the permanent employees. The onslaught of the pandemic has aggravated and built on existing structural issues in the economy.

In the past few decades, economic policy has clearly favoured large corporations with tax and loan waivers and large-scale privatisation. While the policy emphasis on restricting fiscal deficits has meant that social sector expenditure as a proportion of GDP remains substantially below comparable countries. It is not surprising that the number of dollar billionaires increased from just one in the early 1990s to over a hundred in 2020, while millions continue to have insecure livelihoods, low incomes and limited access to healthcare, education, social security or other basic amenities.

Rather than rethinking the policies of the past, the crisis has been used to further push for reforms such as deregulation of agricultural markets, privatisation of core sectors and relaxation of labour rights in the industrial sector. The policy measures aimed towards encouraging corporate investments are not only far removed from the immediate context of continuing hunger, unemployment, supply bottlenecks and deficient demand in the economy, but also do not address the structural causes of India’s pre-pandemic slowdown.

An effective response to the pandemic and the recession lies in a more equitable distribution of growth that includes introduction of wealth and inheritance taxes, and universal public provisioning of basic amenities and services such as health, education, housing, sanitation, water and public transport. The path to recovery from the pandemic of extreme inequality is in a new paradigm of development – one that puts redistribution at the heart of its agenda.