This is Mabel Llevat’s contribution to GRIP’s Imaging Inequality project.

This project presents portraits of Cuban women living in Barcelona. The project focuses on how they deal with inequality and with stigmatization as migrant women: how society see them and how they see themselves. Havaneras consists of images of women and the idea of inequality as a frontier –­ not only among countries and continents but also among realities, classes and gender.

The objective of the project is to identify schemes of stigmatization and dominance and to deconstruct narratives of oppression that are used to represent our body, gender and colonial history.

Traditional “Havaneres” describe women in songs written by white men, Catalan sailors that crossed the Atlantic to access a “wild” region, territories of “conquest” that opposed the European norm and that were related to the image of exotism often used on images of black women.

Havaneras also present the portraits of women who deal with the stigma of poor migrant women who challenge local social mobility. Local imaginaries usually present them as betrayers, poorly educated and profit-seeking women who aim to “infiltrate” the higher strata of society by breaking established boundaries. They usually have to fight injustice, laws, a strong discrimination, a lack of local support and a network of work exploitation mainly managed by men.

The project aims to trigger awareness also on the inequalities brought by the military enterprise associated to Barcelona and the transatlantic commerce. This became a gender enterprise and a political narrative of the Spanish state. “Cornucopias” and “caduceos” were symbols of a colonial hierarchy and represent the idea of an exotic kingdom of abundance frequently associated to woman, being the façade of a system that still today hides the work of women in the accumulation of capitalist wealth. 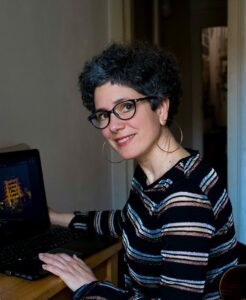 Mabel Llevat is a Barcelona based artist and researcher. She has participated in

Llevat has organized and participated at photography workshops with the subject of society, gender and race, and done worke as part of the collective “Entropicas” (Spain, 2020) with workshops of eco-feminist photography and dance that subscribe solidarity economy and against the conflicts of capital, financial benefit and individualism.

The monographic dossier titled “La Indiscreta” is dedicated to her photography by magazine Arte Al Límite, and she has done research published by University of Rosario and University of Toronto about citizenship and civil society in Cuba.