The imbalances resulting from the implementation of European capitalism in African countries.

Does African populations realize there are hostages of the global “economic growth”? Do they notice, that “chasing” money will never be a solution to their development as autonomous human beings?

“African development is possible only on the basis of a radical break with the international capitalist system, which has been the principal agency of underdevelopment of Africa over the last five centuries” – Walter Rodney

The XAF currency which gives access to western importations is created, manipulated and rated by developed countries who define the terms of exchange. As counterpart, the West provide just enough to survive, thus keeping control on African workforce and lands.

Quite brutal, Penda’s assertion is imaged by pictures that could as well be a depiction of Achille Mbembe’s “brutalism” concept. However, these colorful, monochromatic and relaxing digital representations aim at expressing the marvelous character of a continent that has been incorporated in a devastating matrix.

Besides, the reference to three centuries old allegories of Jonathan Swift in Gulliver’s Travels is undeniable. Indeed, at the center of a XAF currency coin, each scenery shows a giant neat human hand “served” by a Lilliputian African farmer. Penda is literally expressing the idea that through the scope of Western capitalism, the confrontation between Africa and West is similar to a Lilliputian subject meeting Gulliver.

This “indirect rule” enables European countries to legally own African slaves in their former colonies; and, in a long-term basis, to obtain an Africa without Africans.

Alice Christel Penda is a Cameroonian visual artist working in Cameroon. She 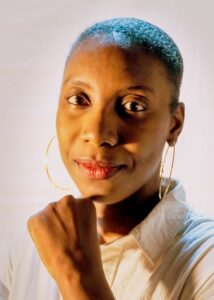 graduated from the Institute of Fine Arts (University of Douala) with a Master II en Arts Plastiques et Histoire de l’Art, in 2020. Prior from studying art, she has a B.Sc. in Banking; and, another one in Mathematics & Computer Sciences.

Penda is the recipient of Prince Claus Seed Award 2021.

Her artistic practice focuses on re-examining history, environment and climate emergency and free-expression/civil society. She is currently working upon the post-colonial economical system of Central Africa, and its impact on populations.