We are not living in Utopian times. In the second decade of the 21st century, the framework of Utopia and Dystopia seems like an outdated binary, one prone to lead to reductionist descriptions and blunt prescriptions in a world where geopolitical, computational, and ideological complexity has brought about new paradigms. 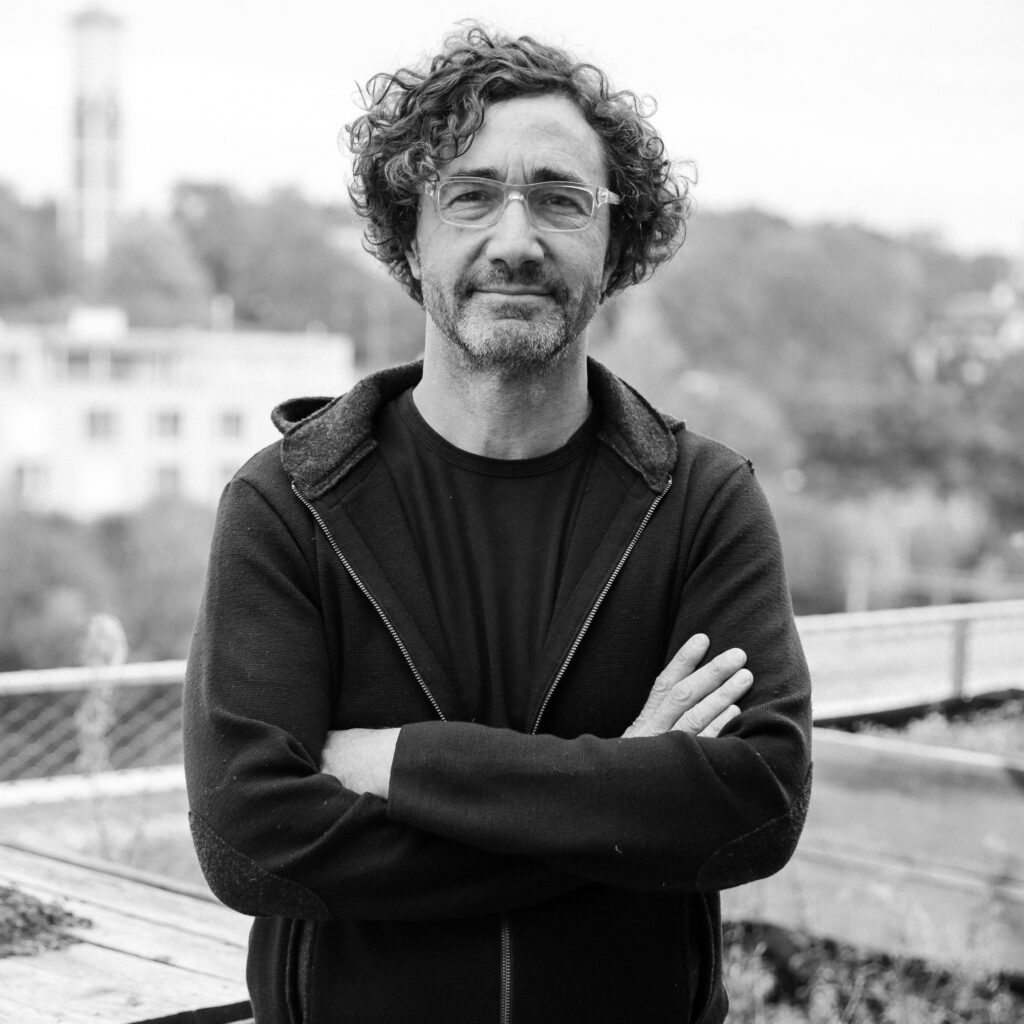 Alfredo Brillembourg is a GRIP affiliate, an architect, and founder of the Urban-Think Tank and the Sustainable Living Urban Model Laboratory (SLUM Lab). Between 2007-2019, Alfredo has been a professor at Columbia University and Chair of Architecture at ETHZ in Zurich. In 2020, he founded U-TT Oslo and the new Parangolè Journal with GRIP.

This text is part of GRIP´s miniseries Speculative Urban Futures. As inequalities rise and cities grow, the need to speculate and probe possible urban futures is more urgent than ever. This miniseries opens up to various types of speculations about potential urban futures.

As Benjamin Bratton as described, “the messianic effervescence of [Utopia] and apocalyptic panic of the [Dystopia] are part of the problem.” Yet, we have been influenced deeply and self-consciously by Utopian discourses and Dystopian images, seeing in both cultural threads a utility. What do we mean by utility? This essay, which is less academic analysis and more self-investigation, seeks to answer that question.

To even the most casual observer of world events in 2022, we are witnessing a time of dramatic social, economic, and political change. In Europe and North America, neoliberalism’s banishment of the welfare state has progressed rapidly since the 1970s and is simultaneously precipitating and threatened by a more insidious right wing. In much of the rest of the world, globalization has wrought politico-economic arrangements that looks more aligned with a new feudalism than the promised rising tide of capitalism, and despite the promises of the internet and social media, monopolized violence looks to be centralizing faster into autocratic state and corporate actors. The violence we are describing (bio-political, ecological, financial, etc.) is geographically proximate to the city, even if externalized to the peripheries of the map. Locating and describing such violence (Ukrainian,  Venezuelan, and Syrian displacement numbers are astonishing) is not just a job for journalists and social scientists, but rather a task for anyone involved in its production.

We argue that – as shapers of the built environment and some of the largest resource flows on the planet – architects and urban designers are not just materialistically implicated in this violence but are also uniquely positioned to understand the overlapping narratives that explain the violence’s causes and effects.

Visualizing a better way to live

At Urban Think Tank (U-TT) we believe there is a lot of information, understanding, and design inspiration to be learned from the existing, human-made world. We’re less interested in the technological, aesthetic, or poetic aspects of Utopia, and more interested in the political, economic, and social. If indeed the role of the designer can be reduced to one essential purpose – that of visualizing a better way to live – U-TT believes that there are numerous better ways to live that are already in existence. Part of our job is to document, understand, and distribute our findings. As we attempt to create images and tell stories about Utopian cities, we find that documentary film is more appropriate than animated renders.

The many collaborators at UTT, such as filmmaker Daniel Schwartz, have often stated that we at UTT are not professional cinema scholars nor theoreticians, rather we take our documentary and video essays as primary source material for scrutiny. To avoid the risk that the reader might find in our film a solipsistic artist statement, we must firmly declare that our engagement in Utopian discourses corresponds with our external focus on identifying and communicating important processes within humanity’s greatest social artefact, the City.

What we ultimately argue is that the intersection of utopian discourses and documentary practices is a particularly important nexus. This intersection encourages creative thought regarding both the real and the imaginary, and it points to new relationships between space and time that have eluded developmental narratives within the architect discipline since the advent of postmodernism.

As in all disciplines, architecture has its own lineage of Utopian theories. It’s these that U-TT most closely studied and responded to with our work. Our first point of reference culminating most prominently, perhaps, with the modern architecture movement of the early and mid-20th century. However, the notion of Utopia resurfaced near the turn of the millennium, perhaps spurred on one hand by a new-found sense of techno-optimism, exemplified by the Smart Cities movement, along with the dystopian fears of impending environmental destruction and the resultant investment in a discourse centered around resilience, exemplified by anti-flooding infrastructure and ecological planning in places like Miami or New York City. Couched in the resilience and sustainability discourse, one frequently finds an implicit nostalgia for natural systems as somehow separate but harnessable. The unmentioned theorization made by architects and designers is predicated on amorphous Utopian ideal. In one shape or another, Utopia is back as a Zeitgeist in architecture as much as any other field.

The work, both architecturally and mediatically, that we, at Urban-Think Tank, have undertaken, is indeed rooted in certain Utopian sources. The radical avant-garde of the 1950s and 60s exemplified by groups like Archigram, Yona Friedman, and Superstudio, are all sources of inspiration for how we approach contemporary design. Their projects, diverse and by no means all rooted in identical theoretical or cultural frameworks, share a commonality in that they generally operated within hypothetical and propositional realms. Reaching for the impossible, largely through drawings, models, and textual publications, they were written off as partial hacks or more sci-fi artists than serious architects. To borrow an observation from the writer Darran Anderson, it’s as if our culture has trouble accepting avant-garde architecture unless there is a profit-motive behind them.

Therefore, we believe in Utopian thinking, not just as a Blochian mode of proposition, but also as a means of instrumentalized agency, as a means of transforming your environment out of necessity or desire, and in doing, forming a community with other individuals who seek similar transformation. Particularly when it comes to urban processes, the complexity of the material-informational-ideological processes at work are beyond representation. There are admirable efforts underway by theorists such as Benjamin Bratton, Keller Easterling, and Pierre Belanger (to name a few), to develop new vocabulary and analytical framework for the intersecting disciplines that surround urbanization. And yet we, as urbanism producers, consumers, and educators need representational tools as a practical matter of meaning creation and transmission. Turning our gaze outward, we see ‘that elements, things, structures and systems do not exist outside of or prior to the processes, flows and relations that create, sustain and undermine them’.

We believe that we’re living in an epoch when professional architects may better serve their historical moment by working with the extraordinary experimentation and material flows already underway in cities around the world. It’s not that we find technological, aesthetic, or poetic aspects of architecture to be unimportant or uninteresting. It’s rather a tacit admission that political, economic, and social concerns must be prioritized. Such an ethical position necessitated the realization that documentary filmmaking techniques may be one of the most potent tools in our effort to research projects, educate students, and communicate with the stakeholders for whom we build.

The implicit exclusion of a conventional Utopia

Because our work often eschews an explicit ethical positioning in relation to their subjects (usually sites of poverty), our films have provoked intense reactions. Perhaps no work more so than our short documentary, Torre David, which was part of a multi-year research and design project our collective conducted. Torre David is a name given to the Centro Financiero Confianzas in downtown Caracas — a financial centre planned around a 45-story glass and concrete skyscraper that, after the structure topped out, stalled in an economic downturn. A decade later in 2007 an organised group of squatters took the building. When we earned the trust of residents enough to gain access to the tower, we found 750 families living in self-built homes and an impressive (if tenuous) neighbourhood system with shops, gyms, community meetings and the like. The architectural sum of their efforts simultaneously resembled both the informal methods of living that enabled huge numbers Caracas residents to inhabit the city’s steep hillside ranchos and the consummation of avant-garde Dutch architect John Habraken’s 1960’s ideal of an open building. By the time the residents were evicted in 2014, two years after our film was released, city officials had decided that Torre David had turned into a dystopian symbol. For the city’s legal chaos, poverty, and housing shortage. They offered the residents a typical modernist slum clearance deal – either move to some new social housing blocks 80 km outside of the city, or go back to the informal settlements. Most residents took the government’s option, and while they gained free housing, they also lost access to the jobs, schools, and social networks that had made Torre David such a potent force for social mobility in the first place.

And what can we say about this Torre David in regard to Utopian thinking? Well we firmly decided at the outset of our filming in 2011, that it could not be reduced to either a symbol of crime and poverty nor a romantic, proletarian victory. We were tempted to think of it as a heterotopia, as it seemed to adhere nicely to Foucault’s criteria of being in relation to its surroundings yet out the same time inverting those relations. It was an oddly perfect synthesis of formal and informal development, a massive mirror that forced the city to reflect on its contradictions.

Taken together, these precepts aptly describe both what Torre David is and what it does. But we would add to this the notion of the “arrival city,” a typology identified, named, and described by Doug Saunders in his book of the same name.[2] Importantly, Saunders replaces the judgment-laden terms for squatter settlements—barrio, favela, slum, shantytown—with arrival city, a place of enormous energy and optimism, and argues that, far from seeking to tear them down and replace them with “urban renewal,” we should nurture these settlements by providing transportation, security, water and sewage treatment, and education.

These arrival cities are, in effect, neither village nor city, but a third space that hybridizes the first two. Places that provide operable networks for society’s most powerless, providing a pathway to housing, employment, healthcare, education, and local politics. These are the spaces where cities have conventionally been grown, enlarged, or renewed with new populations that form an integral part of an urban core. Among the virtues of Saunder’s concepts is the implicit exclusion of a conventional Utopia, one that is objective and static, a “house on the hill” where all is well and will be well.” Instead, it is a notion of Utopia that is process-oriented, experimental, and cosmopolitan. Thus, to operate in this context is to be beholden, to be aware of how the recording and communication of reality can change a city, a neighbourhood, a community, an individual.

Images aren’t moral; they’re only tools. If we accept that architecture is consumed and traded by way of this system of imagery, then it becomes something that architects with social goals can and must utilize. We can just as simply trade images of a project that will help underserved people as one that would further marginalise them. It behooves designers to use the tools at our disposal to agitate for projects that will effect the spatial change that we believe in.

The award-winning documentary about Torre David can be found here.