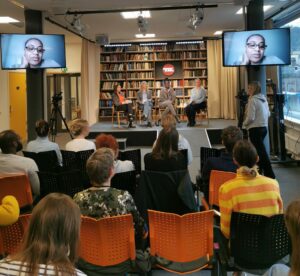 GRIP had the honour of collaborating with Bergen International Film Festival (BIFF) regarding the film “No Simple Way Home”, which was the opening film of BIFF’s human rights programme – Checkpoints. GRIP had the pleasure of hosting the visit of film’s director Akuol de Mabior and to organize several events in relation to the film screenings.  The film screening at the festival was accompanied by a panel discussion with de Mabior, Dora Poni Loro and Leïla Rezzouk focusing on the film and the struggles of South Sudan. The film received a great response from the audience, which led to many interesting conversations in the Q&A following the screening.

Following the screening, GRIP hosted a breakfast seminar at Bergen Global with de Mabior, Carmeliza Rosário, Sarah A. Tobin, Torunn Wimpelmann and Elina Troscenko. The overall theme of the event was perspectives on the futures of post-conflict societies and it focused on exploring how younger generations, particularly women, in different regional contexts approach and see the futures of post-conflict societies. Using the film as a starting point and including such a variety of participants led to a thought-provoking discussion, which we are very happy to be able to share:

Many thanks to all our participants and collaborating partners for a very successful few days! . 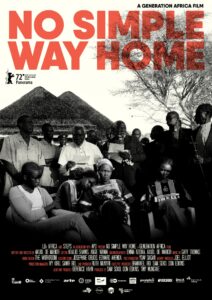 A personal film about politics, nation-building and belonging in the world’s youngest country.

The war in Sudan lasted for 20 years and left the country with disagreements, conflicts, instability and fear. In 2011, the people of South Sudan became independent as a new state of South Sudan was established, but a new civil war broke out. Hopeful voices were singing. But the song didn’t last for long.

The film illustrates the challenging circumstances that the new country is facing. Many families have lost their beloved ones in the war; most people struggle with meeting their ends; in 2020, devastating floods made almost a million people internally displaced, and the government, thorn with internal conflicts and instability, struggles providing solutions to the many problems South Sudan faces.

In the film Akuol De Mabior’s search for home in this challenging environment is accompanied by contemplations of what future means and how it is saturated with fears and doubts. No Simple Way Home is about South Sudan’s newly acquired freedom, and challenges it also presents.

We’re all waiting for things to get better. For more peace. For stability.