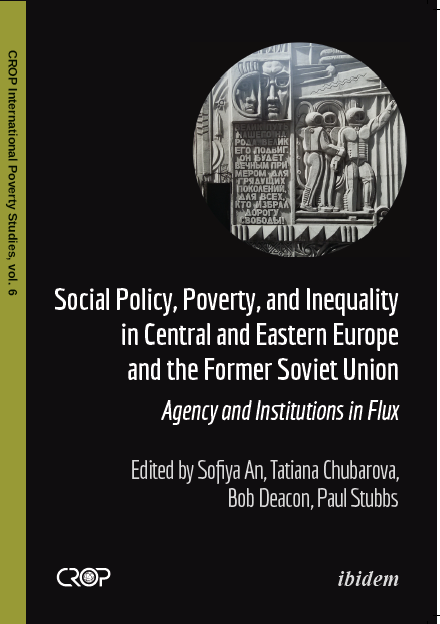 “Social Policy, Poverty, and Inequality in Central and Eastern Europe and the Former Soviet Union: Agency and Institutions in Flux” provides a range of in-depth studies of post-socialist countries, examining their diverse welfare trajectories.

This book takes stock of the diverse and divergent welfare trajectories of post-socialist countries across central, eastern, and southeastern Europe and the former Soviet Union. It traces the impacts in terms of poverty, well-being, and inequality of over two decades of transformation, addressing both the legacy effects of socialist welfare systems and the installation of new social, political, and economic structures and, in many cases, new independent nation-states. Authors from different disciplines address key aspects of social protection including health care, poverty reduction measures, active labor market policies, pension systems, and child welfare systems.

You can watch interviews with editors Paul Stubbs and Tatiana Chubarova where they present the book.

Sofiya An (5 August 1966 – 3 September 2019) was an Assistant Professor of Sociology in the School of Humanities and Social Sciences at Nazarbayev University (Astana, Kazakhstan). With a Master’s degree in Social Work from Columbia University in New York City (2002) and a PhD from the University of Toronto (2014), her research interests were at the intersection of post-Soviet social policy and global, or transnational, social policy. In her research, she examined post-Soviet changes in welfare institutions, the Soviet legacies, and the agency of state and non-state domestic and global policy actors. Her comparative work on child care policies and practices in post-Soviet states contributed considerably to practitioners’ and policy makers’ understandings and formed the basis for a clear analysis of good practice in this field.  She was a member of the European Social Work Research Association and co-convenor of the Special Interest Group on Post-Soviet and Post-Socialist Social Work.

Tatiana Chubarova holds PhD (Social Policy, LSE) and Doctor of Sciences (Economy, Russian Academy of Sciences) degrees and is a Senior Research Fellow at the Institute of Economy, Russian Academy of Sciences, Moscow, Russia. Her professional interests include health and social policy in Russia in a comparative perspective; health care financing and administration; gender issues. Currently she is interested in studying the role of the modern state in social welfare provision, specifically instruments used by governments to cover population health needs. Dr. Chubarova contributed to a number of books such as Health Reforms in Central and Eastern Europe: Options, Obstacles, Limited Outcomes (ed. by J. Nemec and J. Bjorkman. Eleven Publ., Hague 2014); Implementation of New Public Management Tools: Experience from Transition and Emerging Countries (ed. by J. Nemec, M. S. de Vries. Bruylant, Bruxelles 2015); Comparative Health Care Federalism (ed. by K. Fierlbeck, H. A. Palley, Ashgate. 2015). She is a member of the Editorial Board of the Journal of the New Economic Association and Mir Peremen (both in Russian).

Paul Stubbs is a UK-born sociologist who is currently a Senior Research Fellow at the Institute of Economics, Zagreb, Croatia. His main research interests focus on civil society and social movements, social policy, and policy translation. He is currently undertaking research on historical aspects of Yugoslav socialism and the Non-Aligned Movement. His recent publications include Making Policy Move (with John Clarke, Dave Bainton, and Noémi Lendvai, Policy Press), Transformations in Global and Regional Social Policies (edited with Alexandra Kaasch, Palgrave Macmillan) and Social Inequalities and Discontent in Yugoslav Socialism (co-edited with Rory Archer and Igor Duda, Routledge). He is a member of the Editorial Board of Critical Policy Studies and the Croatian Journal of Social Policy.

“This is an outstanding book, a must read for anyone interested in social policy development across Eastern Europe. The book is impressive not only in terms of its scope, but also because of its in-depth analyses, using sophisticated methodologies and data, highlighting the major challenges that the Eastern European region has been faced with over the last twenty years.”

“The volume brings together a group of prominent experts to map trajectories of post-communist welfare state change, and to analyze the social consequences. They recognize the benefits of change, but make it clear that two decades of prioritizing economic growth over social welfare has imposed costs on the majority. The book will stand as an authoritative study of welfare across the post-communist region, of great value to both scholars and students.”

“Encompassing issues of inequality, poverty and welfare in the ‘Global East’, this rare collection of articles by leading scholars in the field follows the great intellectual heritage of Bob Deacon. Ranging from carefully designed single country studies to comparative analysis, the book takes a great step forwards towards ‘bringing the social back in’ to a region torn by the structural and political turbulences of the past decades.”